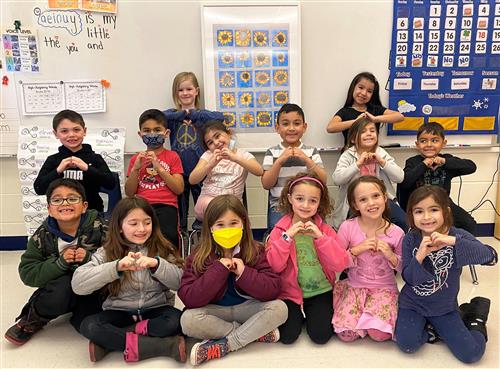 Students in Courtney Fisher’s kindergarten class have taken their Women’s History Month lessons on display on the Woodstock Square hoping to help others across the world.

Fisher said her students didn’t know how women were treated unequally throughout history prior to women’s suffrage or that in some places are still not allowed the basic opportunity to receive an education in some parts of the world.

“They were really surprised that a woman wasn’t allowed to do those kinds of things,” Fisher said. “They didn’t know much about how hard life was for women throughout history.”

Students learned about important women such as Clara Barton, founder of the American Red Cross, first ladies, Malala Yousafzai and artist Georgia O’Keefe. While Fisher didn’t go into war details because of the age of her students, they also discussed the crisis women are facing right now in Ukraine.

Fisher saw an image of sunflowers, the symbol of resistance to the Russian invasion of Ukraine, on social media and came up with an idea to tie the lessons together.

“Our motivation was to help people who were experiencing difficulties,” she said. “I thought it would be cute for my students to do something like that to help others.”

The Verda Dierzen Early Learning Center students drew 42 sunflowers, which have since been framed in two collages.

She contacted Arlene Lynes, owner of Read Between the Lynes bookstore, who planned to sell a collection of essays by Ukrainian women called “Lucky Breaks” as a fundraiser for the Women’s Perspective Center.

Lynes decided to display the framed sunflower pieces in her front window and features a display inside her store with the essay book, books on Ukrainian history and children’s books with themes about peace and kindness.

Customers can bid on the sunflower collages in a silent auction at the display table where there is also a donation jar. All proceeds will be donated to the American Red Cross.

“I was blown away when Courtney contacted me with this idea,” Lynes said. “I can't think of a better way to instill kindness and empathy in our youngest children, while broadening their perspective on the world.” 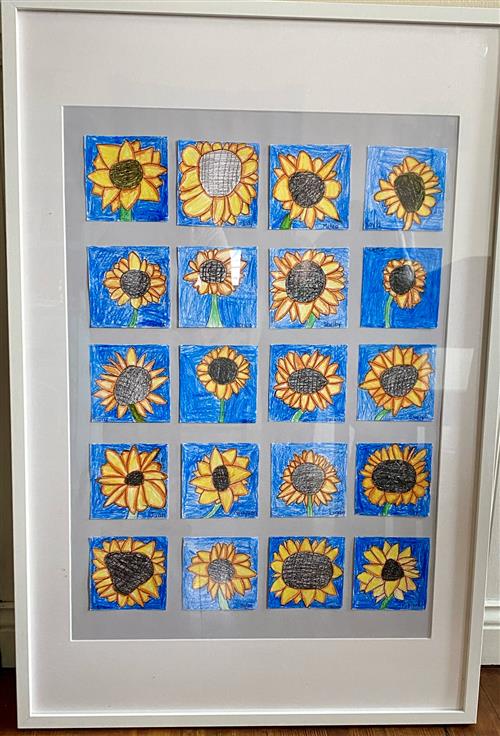