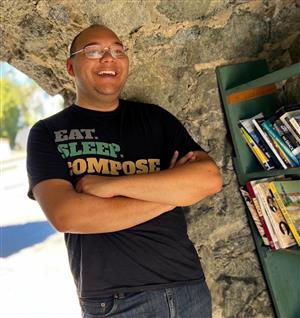 As a senior at Woodstock High School, Alex Riak won first place for a song he had composed, recorded and submitted for the Illinois Music Education Association’s 2014 vocal ensemble composition contest.

It’s no surprise to his former District 200 music teachers, that the music never stopped for the now 26-year-old who recently won a 2nd place out of nearly 200 applicants in the California Independent Film Festival composing contest in the animation category.

After graduating in 2014, Riak studied music composition at Illinois Wesleyan University and later completed his Master’s in Fine Arts in music composition for the screen at Columbia College. He has since been working as a composer in Los Angeles on shows such as “Family Guy” and “American Dad,” among other projects.

“I remember each of my music teachers very fondly for different reasons,” Riak said. “It was my foundation. They were such great teachers who kept making me want to continue with music.”

Riak said Rausch in particular inspired him to study music education, although he altered his course a bit during college. “He was a huge influence on my path.”

Schweihs remembered Riak fondly from his time in elementary school band. In high school, Riak said he participated in every vocal group possible including jazz choir, madrigals, school musicals and the Standing Room Only a cappella group, which competed at the national level.

“Alex showed great instincts for music, and picked up new skills very easily. I remember enjoying trying to keep him challenged,” Schweihs said. “I look forward to following his musical adventures for many years to come.”

Riak said he is now assisting composer Joel Goodman and also has interests outside the realm of movies and television including writing scores for other forms of media.

“I would like to one day work in Japan. I’m a big fan of Japanese media, especially their video games,” he said.