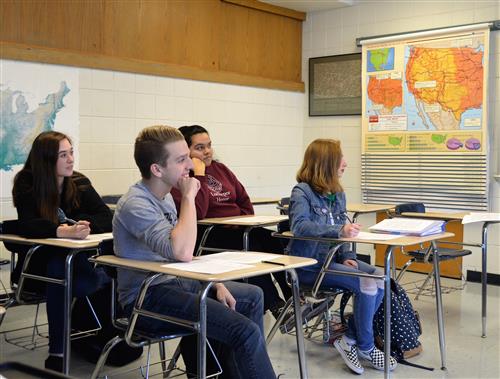 The Illinois State Board of Education this month announced a large increase in the number of high school students taking Advanced Placement exams, but that positive trend in Woodstock Community Unit District 200 dates back a few more years.

Across the state, Illinois high school students took 14,500 more AP exams in 2020 than in the previous year. However, District 200’s increase is best shown over a longer period of time with a spike of 42 percent more AP exams from 2016 through 2020, when more than 4,520 exams were administered.

The number of students taking AP exams at both of District 200’s high schools also increased by 45 percent over that same time period from 443 students to 643. District 200 high schools now offer 32 different AP courses in disciplines ranging from math and computer science to music, art and world languages.

Starting with the 2014-2015 school year, high school administrators at Woodstock and North high schools sought to create more educational opportunities for underrepresented minority and economically disadvantaged students among others. They looked to identify additional students who hadn’t been taking AP classes but demonstrated the aptitude for the academic rigor.

“Our data showed there was a disproportionate number of minorities and students from lower income brackets that were not enrolling in AP classes, and we wanted our AP program to be inclusive for all,” said Justin Smith, assistant superintendent for middle and high school education.

AP classes have typically been populated by students who have been tracking in honors and advanced courses since middle school. Placement is based on a combination of assessment scores and grades. But District 200 educators knew there were other students who could benefit from and have success in AP courses.

Teachers are asked to identify students annually who likely could handle the challenge of AP courses and those students were encouraged to enroll in one AP course. Helping students take advantage of the state’s reduced fees for AP testing for low-income families and considering factors that may have impacted a student’s middle school tracking such as English proficiency development or cultural factors such as students who didn’t come from families with college backgrounds became priorities.

“We were removing barriers for these students whether financial or otherwise,” Smith said.

“We’ve worked hard to become one of a few districts nationally where our AP classes are as diverse as our student population. It is imperative for us that all students in District 200 have the opportunity to open doors and excel at the highest level,” Moan said.

Smith said perhaps the best indicator is that significantly increasing the number of students taking AP courses and exams has not affected the percentage of students who are passing the AP exams, which remains around 70 percent district-wide.

“Many of these students who’ve been identified by their teachers are taking AP tests and earning potential college for credit. We’re seeing that success,” Smith said.

Moan said the benefits of AP courses are both tangible and intangible. Students are exposed to more rigorous coursework which makes them confident about more academic challenges and better prepares them for college. They also get credit at most colleges for their AP coursework assuming they pass the exams, which carries a financial benefit.

“The college credit that our students are earning is saving families in our community hundreds of thousands of dollars a year,” he said.