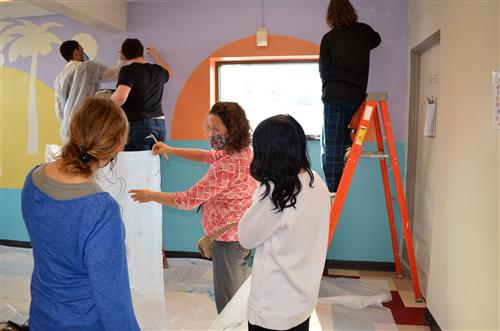 Art students at Clay Academy are leaving their mark on the century-old building with uplifting murals, positive messages and plenty of paint.

At the beginning of this school year, Dawn Cook, principal of the therapeutic day school for students overcoming some educational obstacles, challenged art teacher Laura McLuckie-Khandan with beautifying the interior of the building.

McLuckie-Khandan decided to involve her students in all aspects of what eventually became four separate art projects on the walls of Clay Academy.

“At the beginning of this semester, we spent time as a class consulting and brainstorming ideas,” she said.

One student who has autism came up with a concept of gray rectangles, which he found calming. Another thought of writing uplifting messages on bathroom walls. For the hallways, one mural is a depiction of seeds turning into seedlings from under the soil, while another is a sunset scene on a tropical island.

Uplifting bathroom messages written by the students include: “Grow through what you go through,” “Positive girls are the prettiest,” and “Do what you think you can’t,” among others.

“The students have responded positively. The most effective component has been to give them ownership of the project and empowering them to make decisions and guide the process,” McLuckie-Khandan said.

During art periods, students take on all tasks associated with the projects, whether drawing and cutting out stencils to trace or putting the final purple touches on a tropical sunset.

Cook said it’s been wonderful to see the students so engaged. “Laura has brought so much heart to the art program at Clay. Her essence and passion has brought a true value to art and this is shown in the classroom every day.”

McLuckie-Khandan said the power of communicating through visual arts can have a tremendous impact on students, which can sometimes even tap into unconscious thoughts.

“The visual arts have a certain openness, and freedom in which a person's voice can be shared,” she said. “I have been touched by the depth of thought that has been shared through this process.” 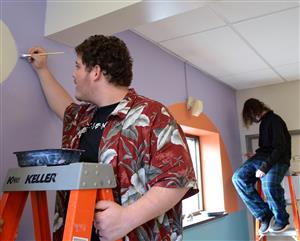 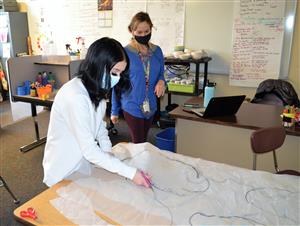