Jack Darby was born and raised in Belvidere and an accomplished athlete at Belvidere High School where he was a four-year baseball and basketball player.As a senior, Darby made a significant impact on the hard court, earning All-State Honorable Mention and averaging 16 points per game. Darby also played football his final year of high school and led the team in receptions as a wide receiver while spending time at quarterback and defensive back, too. 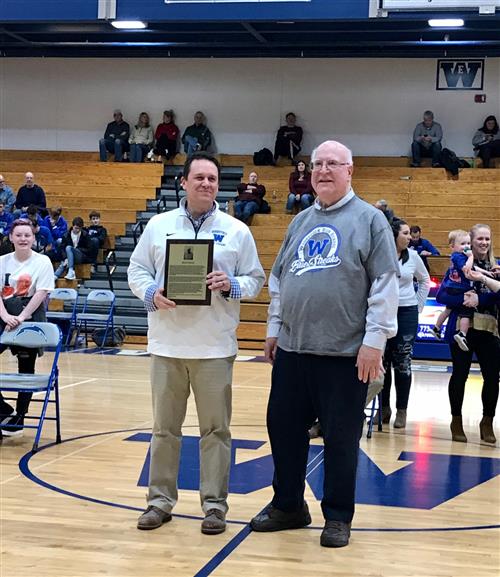 Starting in 1968, Darby taught seventh and eighth grade at Harrison School where he launched his coaching career coaching basketball, wrestling, track, and flag football.  However, his professional calling took him out of the classroom, and Jack began his second career in real estate, starting in 1976 until he retired in 2005.

Throughout his life, Darby has been connected to Woodstock High School in a variety of ways.  Many of his greatest memories came from the years he coached and volunteered for Woodstock High School and District 200. For three years, Darby was an assistant boys basketball coach for the freshman and varsity levels.

He  was also an original committee member and organizer for the Blue Streak Open, serving 10 years on the committee and helping to coordinate all logistics and fundraising.  Jack proudly served as the president of the first-ever D200 Education Foundation, a group of committed Woodstock citizens who fundraise to provide quality educational opportunities for D200 students.  More recently, Jack has been the voice of boys’ and girls’ basketball for 7 years, providing play-by-play analysis and cheering on the Blue Streaks as they take the court.

The 2007 Girls Cross Country team is considered the strongest in school history.  Competing in Class AAA, the team finished 8th at the IHSA State Championship.

Hall of Fame Coach Marty Sobczak and Assistant Coach Bill Macaulay guided a team that possessed a potent combination of senior leadership and younger talent.  Senior captains Gina May and Andrea Ramirez led the way for a squad that served notice early in the season, winning the Crystal Lake South Invitational and then finishing 5th at the ultra-competitive Woodruff Invite in Peoria. 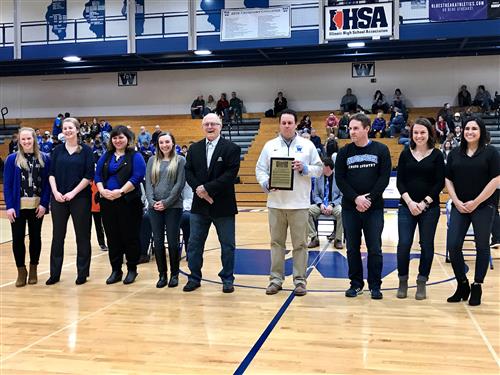 The team then went on a run of five straight invitational victories.  They swept the Ryan Byrne Festival with a perfect score of 7 points and won both the Bartlett and Niles West Invites. Individual champion Kayla Beattie led the team to its first Fox Valley Conference title since 1989, joined by fellow all-conference runners Nikki Greenhill, Elise Beattie, and Lisa Kucharski.

The girls successfully defended their home course at Emricson Park by winning the IHSA Regional, their sixth major invite win of the season.  The team then qualified for state by finishing third at the Palatine sectional, aided by three runners in the top 12 and a particularly strong race from freshman Mary Kelley.

At Detweiller Park in Peoria, the team capped its season with another strong performance.  Kayla Beattie earned all-state honors by finishing in 14th place, followed closely by Greenhill in 30th and Elise Beattie in 31st.  Kelley, Ramirez, Kucharski, and May rounded out the top seven for a group that continues to hold the record for fastest team time in school history.

Coach Sobczak was recognized as the 2007 Northwest Herald Coach of the Year for his skill in leading this group of young athletes throughout the season. Every member of the team played a role in its success, including Erin Borelli, Victoria Castillo, Lindsay Heaver,  Erica Hildreth, Natasha Hutchens, Sonja Hutchens, Stacy Jantz, Erica Jandernoa, Lindsay Prossnitz, and Nicole Rhino.

A 2010 graduate, Logan Kunzie waited until his time arrived and made the most of his senior year as the 2009 Blue Streaks quarterback.

Behind center, Kunzie  captained his team to the 5A IHSA Semi-Final, finishing the season with an overall record of 9-4. In addition, he directed the Streaks to a 5-1 conference record, securing a Fox Division Championship in the Fox Valley Conference. Topping off his in-season accomplishments, Logan earned a ranking among the top players in the state when he was named to the Illinois High School Football Coaches’ Association All-State Team. 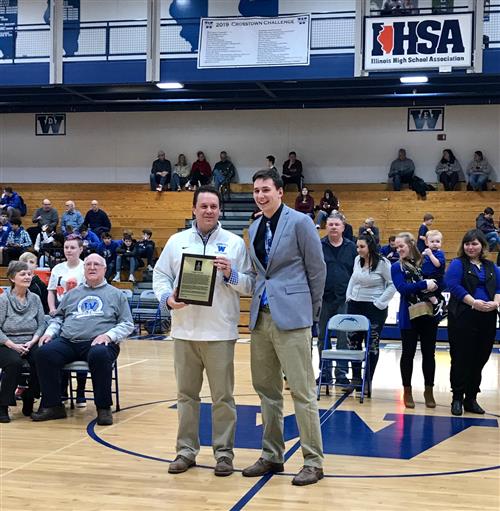 Kunzie studied elementary education and played football at the University of Dubuque in Dubuque, Iowa, on scholarship. He was a member of the 2011 Iowa Intercollegiate Athletic Conference Championship team and 1st-Round NCAA Division III playoff qualifier. His collegiate accomplishments include three-time IIAC All-Conference Academic and a member of the 2014 National Football Foundation Hampshire Honor Society class.

Giving back to the sport he loves, Logan has been coaching football since 2014. In 2018, he came back home to coach for the Blue Streaks, serving as offensive coordinator at the freshman-sophomore level and quarterback coach, program-wide.