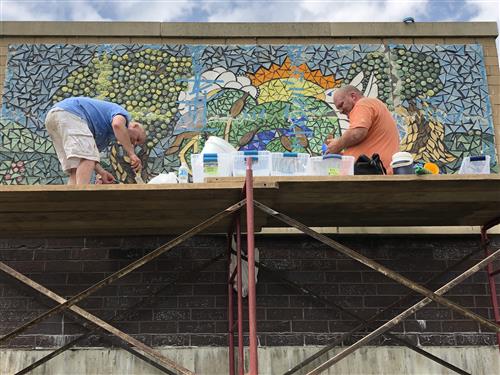 Where the rest of us see emptiness, artists see a canvas — an opportunity. That’s what Prairiewood Elementary and Creekside Middle school art teachers Chuck Jones and Jeriel McGinness saw whenever they looked at the back of the concrete and brick entrance way sign for the shared school buildings.

“The space was blank, unattractive and viewed daily by hundreds of people,” McGinness said. “These large, blank spaces on our campus are opportunities for our students to be expressive and add some beauty.”

Creekside is well-known for its intricate tile mosaics that adorn the hallways and main office. McGinness and Jones decided to take what they learned from those projects to beautify the outdoor campus as an educational challenge for their students.

A family of cranes often visits the marshy land surrounding the campus and were incorporated into the mosaic depicting the prairie. Students learned to cut glass and fashion the tiles that become part of a larger project.

All Prairiewood students and hundreds of Creekside students participated in making tiles for the project, many of which have shoeprints and other impressions. The tiles were then set into panels which Jones and McGinness installed over the last two weeks.

“Our administrators allowed us to let the kids do some creative and fun art on a very public space,” McGinness said. 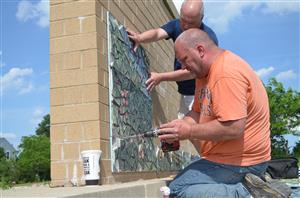 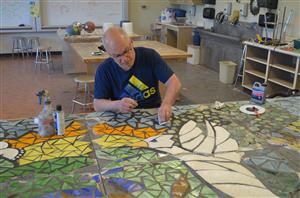